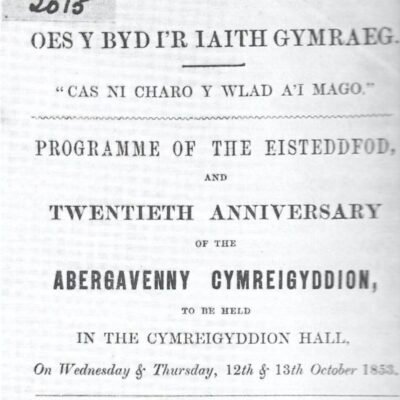 In the first half of the 19th Century a remarkable group of people came together in Gwent to form a society to promote love of the Welsh language and its cultural expressions by way of holding Eisteddfodau. The society was known as the Cymreigyddion Y Fenni.

Between 1834 and 1853, ten eisteddfodau were organised by this society. They were all held in Abergavenny and sponsored by Augusta Hall, the famous Lady Llanofer, also known by her bardic name Gwenynen Gwent.

Lady Llanofer is well known for creating the image of what came to be regarded as the traditional Welsh costume, as well as for her support of Welsh harp music and folk songs.

In her backing of the Abergavenny eisteddfodau, Lady Llanofer was supported by her husband, Sir Benjamin Hall (of ‘Big Ben’ fame) and by Rev. Thomas Price, “Carnhuanawc”.

The substantial prizes offered at the Abergavenny eisteddfodau, (sometimes as much as eighty guineas) attracted major Welsh literary figures  and European Celtic scholars  as competitors.