BGHF funded this  plaque in recognition of Rhys Davies, an engineer from Tredegar who is said to have changed American history.

Rhys left south Wales in 1833 to help build Tredegar Ironworks in Richmond, Virginia, which was named in his honour. This Ironworks extended the American Civil War by giving the Confederate South a huge arsenal. It later provided materials and jobs to rebuild the South after the war.

Rhys is said to have lived and trained in Tredegar from 1800 as an engineer and millwright. Some years later he worked with one of Napoleon’s former marshals in France who was building an ironworks there.

His life story may never have become apparent if it was not for a small article in a Hereford-based newspaper which stated that a Rhys Davies from Tredegar in south Wales had died in Richmond Virginia in 1838.

The American Civil War Centre now stands on the site of the Tredegar Ironworks in Virginia, where Rhys Davies is better known. He died before the civil war started but the Works he designed had a very big impact. 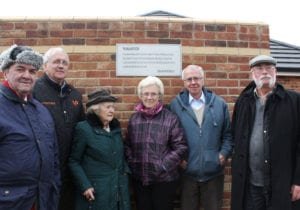 This plaque was unveiled by BGHF to mark where the former Gwalia Boot Factory, which later became the ‘Brynmawr Experiment’ reopened by Peter Scott and the Quakers as the Brynmawr Furniture Factory. The factory was heavily involved in war production for things such the webbing for the Mosquito fighter bomber during the Second World War.

The remains of the factory could be seen until it was demolished to make way for Melin Homes’ Factory Road development. Daniel wrote in his diaries…

‘Large Iron Works of this kind are by far the best school for a young engineer to get a general knowledge of what he needs in life.’

‘I look back upon the time spent at Tredegar as by far the most important years of my life.’

In 1833, following his father’s death, Daniel left Tredegar and progressed to become an outstanding locomotive designer of his period. His broad gauge engines set standards wherever railways ran. 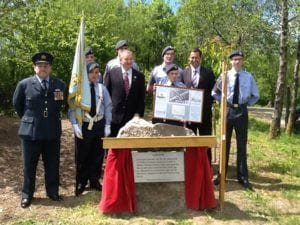 This plaque,  on a piece of four foot quarried stone, was unveiled in remembrance of a wartime RAF bomber crash which killed one of its crew.
The Whitley bomber crash landed at nearby Pen Bryn Oer Farm on 13th November 1940. The plane of 10 Squadron, was returning from an attack on German U-boat pens in Western France.
Although badly hurt,the five crew survived the impact. The wireless operator, Sgt George Christie dragged the others clear of the wreckage as ammunition was exploding in the burning aircraft. Mr Hawthorne of Pen Bryn Oer farm gave them shelter and took them to Rhymney hospital where Pilot, Sgt Peter Dickens-Goldsmith later to died.
Eifion Lloyd Davies of Blaenau Gwent Heritage Forum conducted the ceremony and local historian, Wayne Morris gave a talk on the incident. Cadets and a standard bearer from 2167 (Tredegar) Squadron ATC also attended the ceremony.
Mr Morris said the memorial was needed because although many of the military aircraft crashes across south Wales were well documented but this one had been ‘relatively forgotten.’
The Whitley bomber had taken off from RAF Leeming on 12th November 1940 to attack the submarine base in Lorient, southern France. When returning, the aircraft had become lost and struck Rhymney Hill. 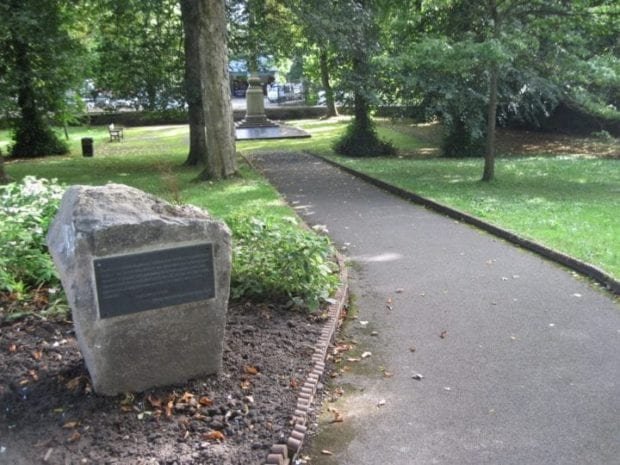 BGHF  placed this plaque in the grounds of Bedwellty Park, with a dedication ceremony to honour the locally recruited men of the ‘3rd Mons’ Battalion who gave their lives during the 1914-18 ‘Great War’.

In April 1915 the 2nd Battle of Ypres commenced with a German attempt to seize that town. The 3rd Mons began the battle with 1020 men, of whom only 134 survived unscathed.